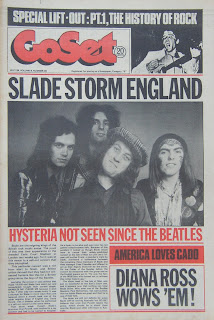 Hooray for Slade. By 1973, Slade were the all conquering heroes of poppy rock, or glam rock as it would become known. Historically Slade had gone from punk rock to glam rock. As a punk-like in the early 70s, or bovvers (maybe) they hadn't really made a lot of  impact. Their early songs were growing in style, however, the glamming of Dave, and the excesses of Noddy's efforts to get audience participation fell on yet to be enthusiastic audiences.
Interestingly in 1973 Slade toured Australia with Lindisfarne, and a still largely to be discovered Status Quo.
In this issue of Go-Set the dates of the tour had not been set, but Go-Set announced they were coming. The article is almost a history piece on the band. Slade were one of the most successful rock acts England was to produce. Yet in America they made little impact.

In 1973 Ed Nimmervoll had been made principle editor of Go-Set by the new owners. Phillip Frazer was no more in charge, and the new owners had imposed a limited budget on the looks of Go-Set. The effects were a less diverse paper in terms of looks. The content was now more obviously sourced from UK pop newspapers, and the size of the Go-Set staff was reduced.
Ed Nimmervoll asked the industry to look at itself with this editorial. It was obvious to him that there was much to be corrected in the way the Australian rock music industry worked.
He picks on two specific areas, the "hustlers" who have taken advantage of the musicians and who "ripped them off, degrading the,, controlling them", meaning the musicians, and that these "artists" have been "satisfied with the hollow promises of the hustler They put up with lousy conditions and equipment."
Ed Nimmervoll ten goes to savage the record companies who "don't help the acts in the slightest and the acts don't help the record companies AT ALL."
Then Ed gibes it to the radio stations though the lines that "what's crippling this industry most of all is the radio, with its singlew rock network, turning down records left and right, having the scene wide open to one set of radio programmers pointing the scene wherever they see fit, to whoever gets closest to them"
The finger points at the issue of perhaps corruption, but does not actually say it.
Finally, Ed appears to be frustrated by the whole thing, "It's becoming increasingly difficult to feel patriotic, no matter how worthwhile we might think our local performers are."
Go-Set's charter was to make the issues of musicians and its readers known. The be an iconoclast on the Australian scene, and this editorial makes it clear that Go-Set doesn't like it. 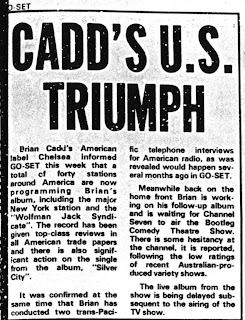 The growing success of Brian Cadd in the USA was being made public by Go-Set. Yet Go-Set is pre-empting a position to its readership. Go-Set would always crow about Australian success, no matter how big or small. 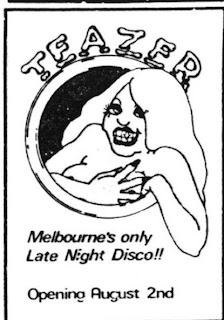 This looks like an interesting place. Who remembers Teaser? Will someone please tell me!!! 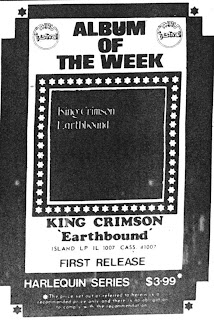 Times have changed. Would an album like King Crimson's Earthbound, today be chosen by anyone as an album of the week. Contextually, it should be noted that this is actually an advertisement.

Ian Meldrum also survived as the co editor of Go-Set, although according to Ed Nimmervoll, Ian didn't do very much. By now the "campness" that was Meldrum at the time is quite obvious, and had been for quite some time.  It's interesting to read this as the phrasing sounds like Molly on Humdrum, or on Hey Hey It's Saturday. Molly (Meldrum) continues the industry buzz at the time, following on from Melody Maker and NME that Bowie was quitting. However, the truth was more that Bowie was Ziggy Stardust, not that he was giving up show business. It would interesting to know whether Meldrum did have the inside gossip on Bowie at that time, or whether he really believed that Bowie was quitting for good..

The top40 chart for this week has the highest Australian song as being Col Joye at 5, with "Heaven Is My Woman's Love", and Barry Crocker at 7 with "Suzie Darling".
The songs on this singles chart seem surprisingly soft, in terms of the lack of twangy guitar songs.
Relatively speaking, the albums chart is way more progressive with Pink Floyd, Led Zeppelin, Deep Purple, Rick Wakeman, Yes, and Focus in the top 20.
One might say, "what a strange time it was"!!! 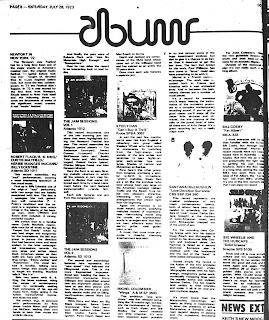 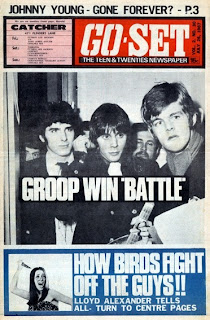 This is the cover page from the July 26, 1967 issue of Go-Set. The issue contained a wide variety of information and topics and even ventured into the ethics of sexual relations.
However the cover made the announcement that the Groop had won the Battle of the Sounds competition.
The other mention of note is that Johnny Young was still in England, and would never return???

Top 40 charts always afford great interest.
The first Australian song in the charts is at number 14, Easybeats: Heaven and Hell; followed at 15 by the Twilights: Young Girl; and then at 16 by Normie Rowe with But I Know.
The top 5 songs show the diversity of the music of the period with Procol Harum - Whiter Shade of Pale at 1; Scott Mackenzie with San Francisco at 2; Silence is Golden by the Tremeloes at 3; Waterloo Sunset by the Kinks at 4; and finally Petula Clark at 5 with This Is My Song; At 40 is the Groop with Woman You're Breaking Me. The highest debut is by the Beatles with All You Need Is Love which debuted at 9 on the chart.
There's probably a great deal to be said about this chart that is interestingly so representative of the hippy period and the beginnings of Haight Ashbury and also the slowly developing soul music which took a while to get going in Australia, except for the bigger hits and Max Merritt's interpretations. But Australian pop at this time was just beginning to mature, thanks to the help of Go-Set.

Go-Set really got around. Capturing pictures from a dance at Laverton Airforce base. Denise Drysdale, Penthouse girls dancing, and a heap of bands made a wild night, by 1967 standards. More pictures to come 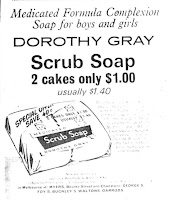 Go-Set catered for the needs of its readers, so a soap ad was not out of place. Brand placement of Dorothy Gray, on one of the social pages was about educating the masses.

The questioner, Michelle, lays the groundwork for Lloyd to put forward an argument as to how values were changing. This background comes against a moral set where the older generation was still coming to grips with the mini skirt, and the recent introduction of "the pill". So sex for pleasure, with the limited chance of pregnancy become a talking point for the generation. The question itself related to under age sex brought about by the needs of the poorest members of society!!!

Finally, more advertising, or advertorial. A Taste of Honey is some quite specific product placement in the form of an article. Place in the "You" section of the issue, it is part of the fashion section of the issue, and was aimed at both at making Go-Set the lead fashion magazine and to provide advertisers with a way into the minds of the readers.
Posted by David M. Kent at 11:22 PM 4 comments:

David M. Kent
I have had a life of several careers. Starting as a DJ, then a communication engineer, then as a teacher of media and public relations, now I do this!! WOW.